From the moment I first heard about Two Point Hospital during its E3 presentation, my heart leapt with joy.

Let’s backup a little bit to give some context:

A long time ago in 1997, a little game called Theme Hospital was released on the PC by Bullfrog Productions. The premise was simple: build and maintain your own private hospital, improve your reputation, cure as many people as possible and make as much money as possible to become the best hospital around.

It received worldwide critical acclaim , and a somewhat cult following has continued to enjoy it to this day thanks to mods such as CorsixTH. When I think about it, Theme Hospital has been a part of my gaming life on and off for over 20 years!

What has made it such a tough runner for so long is its brilliant mix of being easy to learn, difficult to master, as well as being unpredictable and hilarious with its wacky fictional diseases, natural disasters, emergencies to deal with, rats to shoot … ahhh, so good.

Now its spiritual successor Two Point Hospital has been released, and—although I have only played for a short time so far—it is definitely a match for, and perhaps may even surpass in many ways, its master.

Firstly, it looks gorgeous. The art style is adorably cartoonish and yet realistic enough to make me believe it can be set in some mid-Atlantic county (both this and Theme Hospital have this interesting hybrid American/British culture going on in them). It shares a lot of design points with the previous game, such as nearly identical character designs and colour palette, and yet at the same time developing upon them to appear more contemporary and refined.

With regards to the controls, initially I had to keep reminding myself that, no, this isn’t Theme Hospital mechanics-wise. The muscle memory and conscious areas of my brain were fighting for dominance as I tried to learn the ropes of the game, to the point where I ended up customising the control options to reflect Theme Hospital‘s a bit more (I am so grateful you can do this, seriously cheers).

From the offset, the original’s dry humour is apparent in Two Point Hospital. There is an opening pre-rendered video, much in the style of Bullfrog’s old games, where a slick doctor/possible salesman introduces us to our new world of running hospitals, and how great it is at Two Point (while fires burn everything in the background and the ghosts of all the dead patients haunt the corridors).

The introductory tutorial is simple and succinct. It has us place the basics of a small health centre—reception desk, GP’s office, pharmacy, as well as introducing us to the basic functions of the customer assistant, doctor, nurse, and janitor. Everything else you will come to know builds upon these basics, and the whole tutorial is pretty much identical to that in Theme Hospital, which is a good sign that more advanced methods of play will be introduced equally well.

Playing further, every new menu/game function etc. that you encounter is accompanied by a short pop up description box detailing the essentials about it, along with a tip or two. Small and often while you’re playing is the best way to learn! 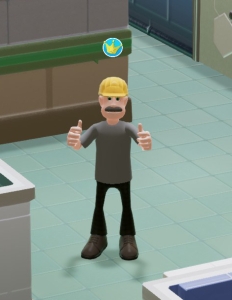 Here are a few more points I noted while I played:

For both veterans of Theme Hospital and newcomers to Two Point Hospital, I feel as though this game would be very easy to pick up and learn how to play. As opposed to being a pure sequel to the former, Two Point is more like a re-imagining of the same idea, with a bunch of added extras. Plus, it is a blinkin’ lorry/ambulanceload o’ fun!

So suspend all expectations, and just go wherever the hospital bed may take you.

Two Point Hospital is out now on Steam. Go go!

If you’re so inclined, I’ve just noticed that Theme Hospital is 99p on GOG.com at the moment! Worth a punt? You can always use CorsixTH to run it in HD …

Blogging about games, gaming culture and events! View all posts by Andria

This site uses Akismet to reduce spam. Learn how your comment data is processed.